Laura, an ESOL student from London, recently attended an unforgettable event at the British Council, where she met a very special visitor. Read and listen to Laura’s story and complete the exercises about the text. 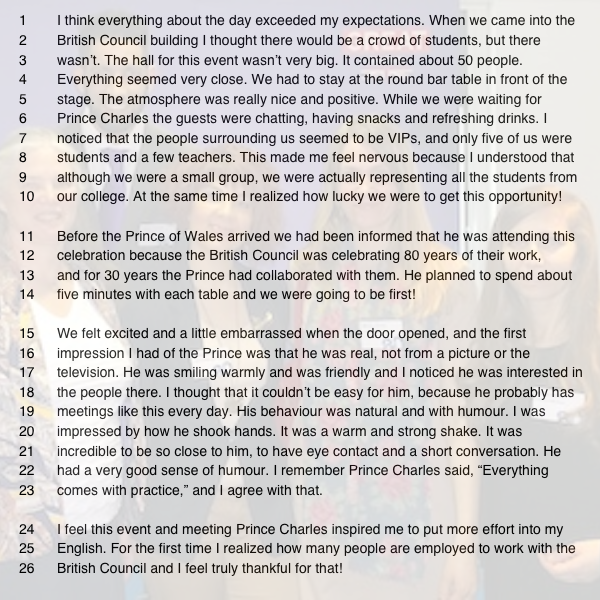 ▶A special occasion - by Jessica

Read and listen to another student, Jessica, who also met the Prince of Wales that day.

It began when my English teacher invited us to go an event at the British Council to celebrate 80 years of their work. At the beginning when Sarah told us that the Prince of Wales would be there I never thought that it meant I would see him as close as I did.

I didn’t expect it to be like it was. I thought I would see many students like me, but actually we were the only ones there. The place was small and I saw there were many important people. Later I understood why we were there and why we were also important. The British Council gives a lot of money so that many people can learn English and improve their lives here.

So when we went to the British Council, some teachers and others started to ask us what we do in London, what we want to do and stuff like that. After a while they told us that the Prince was coming and he would come to speak with us. This was very surprising for me and exciting. I was very nervous because I’ve never seen anyone so important and, at the same time, so serious. I mean, somebody from the royal family. It means you have to know some manners and be very polite.

When I saw the Prince come towards us I didn’t know if I would be prepared for that occasion. He started to shake hands with each person and to ask every single person where they are from, their names, etc. It was, for me, the most natural way to behave. He was so human, friendly and polite that it left me with a very good feeling. I could see that he is a very good person, he knows how to speak, what to ask and the most important for me, to be human and to listen to people.

So, in conclusion, I can only say it was an amazing experience that I’ll never forget and I am grateful to Sarah for inviting me.

I think everything about the day exceeded my expectations. When we came into the British Council building I thought there would be a crowd of students, but there wasn’t. The hall for this event wasn’t very big. It contained about 50 people. Everything seemed very close. We had to stay at the round bar table in front of the stage. The atmosphere was really nice and positive. While we were waiting for Prince Charles the guests were chatting, having snacks and refreshing drinks. I noticed that the people surrounding us seemed to be VIPs, and only five of us were students and a few teachers. This made me feel nervous because I understood that although we were a small group, we were actually representing all the students from our college. At the same time I realized how lucky we were to get this opportunity!

Before the Prince of Wales arrived we had been informed that he was attending this celebration because the British Council was celebrating 80 years of their work, and for 30 years the Prince had collaborated with them. He planned to spend about five minutes with each table and we were going to be first!

We felt excited and a little embarrassed when the door opened, and the first impression I had of the Prince was that he was real, not from a picture or the television. He was smiling warmly and was friendly and I noticed he was interested in the people there. I thought that it couldn’t be easy for him, because he probably has meetings like this every day. His behaviour was natural and with humour. I was impressed by how he shook hands. It was a warm and strong shake. It was incredible to be so close to him, to have eye contact and a short conversation. He had a very good sense of humour. I remember Prince Charles said, “Everything comes with practice,” and I agree with that.

I feel this event and meeting Prince Charles inspired me to put more effort into my English. For the first time I realized how many people are employed to work with the British Council and I feel truly thankful for that!

I was offered a job last in the of march 2014. When I resumed the work, in no time, I found out that my boss, the c.e.o of our company is not just boss, at the same time he always involve solving problems with every team in different sites. I discovered that, his experienced in both banking and telecommunication operations. In discussion with him one day, He explained to us how he started his career till he find himself owning a company of about fifty-three employees. The story make me delighted and I realized that there is no limit to attaining great position when you give your best in whatever you do in life. As I speak, his a young multi-millianaire and I'm impressed working with him.
My story we someday motivate people around the world. I am not just saying it, but I am determined to make difference in the world with my research to become an inventor.