Sadaqat, an ESOL student from London, recently attended an event at the British Council where he met Prince Charles. Read and listen to his story and complete the exercises about the text. 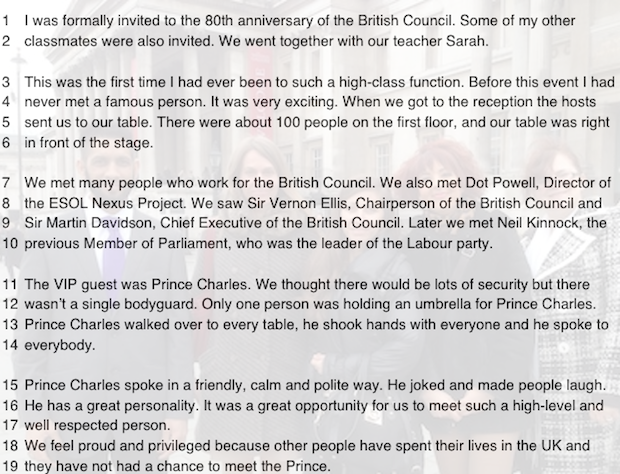 ▶A British Council event - by Rositsa

Read and listen to another student, Rositsa, who also met the Prince of Wales that day.

I never ever thought that I would see Prince Charles in person. When the other students and I went to the event I still couldn’t believe it. The British Council office was very nice and stylish. When we walked in, there were other people waiting to see His Royal Highness. All this made me feel a little nervous.

We had some drinks and a light lunch. There were other guests at our table. Sarah introduced us and we had a conversation with them. One hour later we were told that Prince Charles is going to be with us very soon and we were having the chance to speak to him.

Ten minutes later His Royal Highness entered. When I saw him I felt so proud of myself. Prince Charles came to us, he smiled, we shook hands and started talking like we had known each other for a long time. If I had been told by somebody that he was so ordinary I wouldn’t have believed them. Prince Charles didn’t stop smiling and making jokes.

I haven’t seen any princes in my life before but I think he is a real prince. He does care about people. Two days later I am still thinking about this event and what a good person Prince Charles is. I am more than happy that I had the opportunity to see The Prince of Wales in person.

I was formally invited to the 80th anniversary of the British Council. Some of my other classmates were also invited. We went together with our teacher Sarah.

This was the first time I had ever been to such a high-class function. Before this event I had never met a famous person. It was very exciting. When we got to the reception the hosts sent us to our table. There were about 100 people on the first floor, and our table was right in front of the stage.

The VIP guest was Prince Charles. We thought there would be lots of security but there wasn’t a single bodyguard. Only one person was holding an umbrella for Prince Charles. Prince Charles walked over to every table, he shook hands with everyone and he spoke to everybody.

Prince Charles spoke in a friendly, calm and polite way. He joked and made people laugh. He has a great personality. It was a great opportunity for us to meet such a high-level and well respected person.

We feel proud and privileged because other people have spent their lives in the UK and they have not had a chance to meet the prince.

I am a Prince from a Royal family

I would have asked him, the worst scenario he has ever witnessed in life.

No, If I happen to meet the prince, I would probably ask him how does it feel to be a prince of a the greatest country?